Since 1868 when Japanese immigrants arrived in Hawaii, there was a period when Hawaiian sake brewing was flourishing. At that time, the sake brewing technology that was born in Hawaii was so successful that it was imported back to Japan. However, over time business declined and the last sake brewery closed in 1986. Later, Chiaki Takahashi, a brewing researcher who visited Hawaii, learned about its great achievements and history and planned to revive a sake brewery in Hawaii. Therefore, a new brand was needed for a sake brewery that will be revived in Hawaii for the first time in 33 years.

Sake made in Hawaii is back for the first time in 33 years!
Lead your business to success with the power of branding design.

In Hawaii, there are many Hawaiian cultures whose roots are said to be Japan, such as Hawaiian shirts, loco moco, and bon dance. Hawaii and Japanese people share a common spirit as “islanders”. The brand name decided was “Islander Sake Brewery” with the desire to revive Hawaiian sake brewing and spread sake culture from Hawaii to the world. The brand logo based on the concept of “ISLANDER-Fusion of Hawaii and Japan” represents the ” I “as a Japanese sake bottle = Japan and ” D “as a palm tree = Hawaii. By making the symbol mark ” ID ” eye-catching, it gives off the image of Sake made in Hawaii . The Hawaiian Tapa pattern symbolizes “wave = water = liquor” and the key visuals in emerald blue created a strong and impactful identity. Based on these visual identities, we developed various touch point tools that will be the point of contact with customers, such as sake brewery product labels, as well as sake brewery spatial graphics, printed matter and logo goods creating strong brand image. 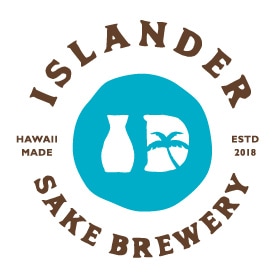