The long-established Japanese restaurant “Mr. Ojisan”, which has been loved by the locals in the Kapahulu district of Hawaii, needed to be rebranded to move to King Street. The client wanted to make a big change from the traditional Japanese restaurant to make it a cool place for local young people to get together at Mr. Ojisan. There are two large counters, a bar counter and a sushi counter, where you can easily enjoy sushi, Japanese a la carte, sake and cocktails. “Neo Bar” is a space where customers can freely enjoy themselves, such as those who want to enjoy a light drink, those who want to enjoy tasty Japanese food, watching sports while drinking with friends, and enjoying karaoke. The challenge was how to promote this new style and spread it as a brand image.

Mr. Ojisan, a long-established Japanese restaurant that has been loved by Hawaii locals, has been renewaled as a space`` Neo Bar & Sushi ``where you can enjoy various ways!

The brand concept is” Cyberpunk-style cool Japan, “which is popular among our main target, young people in Hawaii. As for the brand name, we left “Mr. Ojisan”, which is already well-known in Hawaii, and “Neo Bar & Sushi” as taglines. And “ESTD 20XX” does not express the actual year, that makes us feel the near future. “Ojisan” means a middle-aged man in Japanese, so the symbol “Samurai’s uncle” makes us feel cyberpunk. By using Japanese “Kanji, Hiragana, Katakana” signs and neon signs which will appear in near-future movies and animations as a motif to express brand visuals. The names of drinks and dishes served here are written in both English and Japanese.

The exterior and interior are unified with the brand color calm red and black. That with brand visuals gives an unforgettable impact once you visit. The sign is painted directly on the outer wall to give it a texture over time, and the brand visuals on the windows and walls inside the store are the signature of the store. In addition, we aimed to spread the brand image by developing visual identities from printed matter such as store cards, gift cards, coasters, to various touch points that are points of contact with customers, such as signage and spatial graphics. After reopening, many young people who did not know Mr. Ojisan visited, as well as fans of the previous store. The branding was successful. 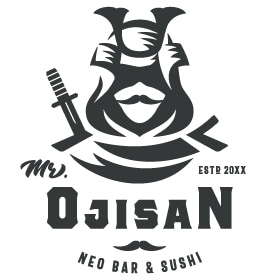